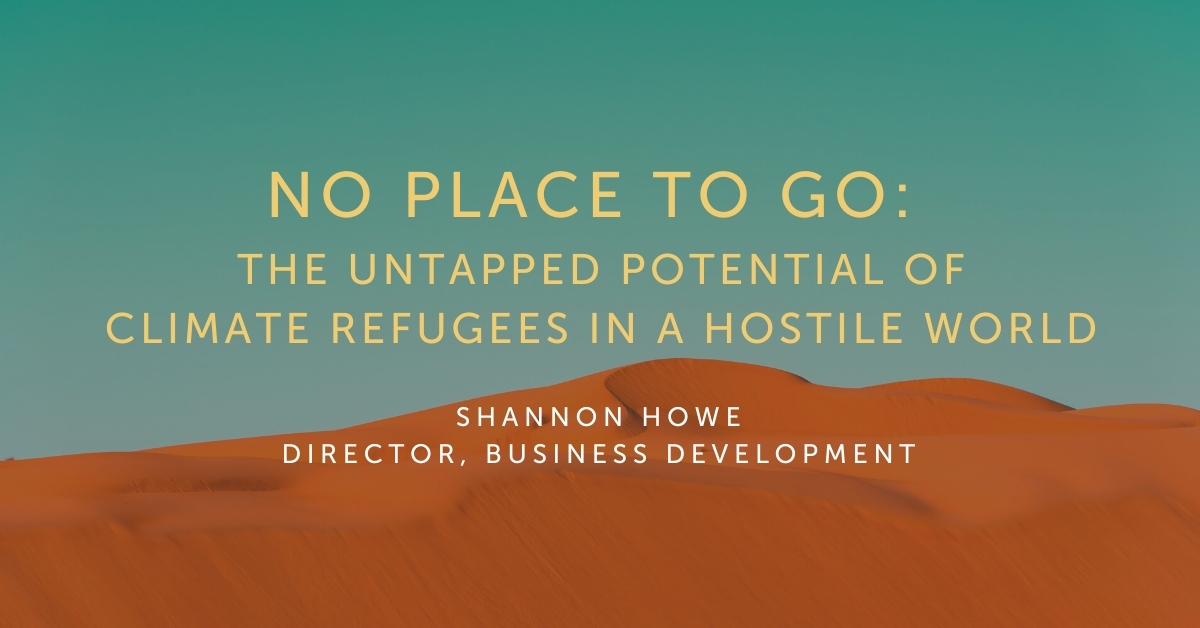 No Place To Go: The Untapped Potential of Climate Refugees in a Hostile World

ow often do you go to the ATM to pull out cash? Use the mobile feature on your phone? Utilize new apps that come into the market like Zello and Venmo? Apps that are seamlessly linked to checking accounts you most likely have had from your youth and likely can’t remember when or what was needed to open them. Unfortunately, not everyone is afforded this same luxury. For refugees, migrants and asylum seekers, gaining access to these basic needs can be an enormous hurdle given the social and economic barriers they face.

A refugee is a person with “a well founded fear of being persecuted for reasons of race, religion, nationality, membership of a particular social group or political opinion.” The UN Refugee Convention (1951). The convergence of climate change with the refugee crisis, people are being forced out of their homes and countries for more reasons now.  New definitions will be needed  to encompass both the imperative and double bind people are in as it pertains to climate, economic, and war driven migration.

Think back to the past few years across the globe. How many times did you turn on the news to hear the words “unprecedented storm, record-breaking heat, strongest hurricane to hit landfall, droughts, floods, wildfires scorching the earth?” Heart wrenching stories of people fighting for their lives, standing over what used to be their home, their livelihood are all too commonplace. We’ve witnessed mother nature at her strongest ripping through countries and destroying lives. But she is not the one to blame, we are.

And this is not a piece about climate change - it’s about people.

I turned on the news this morning (Monday May 3rd, 2021) to learn that there were at least 4 dead and dozens injured when a suspected human smuggling boat was overturned.

Last year I watched closely as “unprecedented” wild fires raged through my state.” At the same time I was also fielding calls from my family on the East Coast and it was hurricane season. I’ll never forget the call I received when my Dad said “if the European model is right, we are looking at total devastation.”

Regardless of where you are located, we all have some version of how we are affected by the climate in which we live. Some more than others – just last year 16.1 million people were displaced globally due to weather-related disasters, more than 1.2 million of those were Americans. As with most issues, this burden is not shared equally and failure to act on all of our parts will only serve to amplify any existing inequities.

Climate change impacts those already living in crisis the most. Compared to Americans who are more insulated from the direct impacts and often have access to greater resources. Today, 1% of the world is a barely livable hot zone. By 2070, that portion could go up to 19%.

In one model, if governments take modest action to reduce climate emissions, about 680,000 climate migrants might move from Central America and Mexico to the United States between now and 2050. If emissions continue unabated, leading to more extreme warming, that number jumps to more than a million people. (None of these figures include undocumented immigrants, whose numbers could be twice as high.).” - NY Times, The Great Climate Migration

I would be sad to leave my home as would most people. I have the means to rebuild, access to financial resources should I need them. But if my journey started as one of the 70 million refugees who are currently forcibly displaced worldwide, a number projected to grow to over 300 million by 2030 according to the Refugee Investment Network, my path would be adversely different.

I could be fleeing for my life with only the clothes on my back and fighting for my life from an overturned smuggling boat. If I were one of the lucky passengers to make it to shore, I would then be subject to a mandatory immigration detention and could face prison or jail time because of my inability to pay my immigration bond. A bond with a price tag ranging from $1,500 to $250,000.

"We all play a role in global warming, and subsequently, climate change. We all live, work, and contribute to our respective societies and economies in an increasingly globalized world. So what do you do when trying to solve for a problem with symptoms that manifest across ALL of these different spheres?"

With so many millions displaced, we need to be thinking of the global context. Shifts in population have multiple impacts and are likely to increase poverty, accelerate rapid urbanization of cities and overwhelm financial and health service providers. Mix in social bias and exclusion with climate migrants often perceived as competitors for jobs and housing and an overall drain on the economy.

“If you have a strong will, God willing, nothing is impossible. I am, thank God, strong-willed and determined. We are on this boat out at sea, and we will reach a country that will help us and we will return the favor.” This is a quote from Hamza Khawalda, a refugee interviewed in the documentary from Ai Weiwei called Human Flow (a MUST watch). As they stand now, financial systems do not make it easy for Hamza and others like him to return that favor.

Migration can bring great opportunity not just to the migrants but to the places they go. These are individuals who have an entrepreneurial spirit, are resourceful and obviously resilient and can inject fresh blood into an aging workforce. I’m an innately optimistic person and I like to look at the possibilities.

An example of grit and an entrepreneurial spirit resides in Zataari in Jordan, the world’s largest Syrian refugee camp. What started as temporary housing now turned permanent 5 years later is now “home” for 80,000 people. They’ve recreated their lives and developed their own economy which has since resulted in the creation of 3,000 businesses. That sounds like the opposite of a drain on the economy.

Fortunately, there are crusaders out there who are diligently working to close the opportunity gaps and are using finance as a force for change to push against systems that are harmful, extractive, and inequitable.

This is the role at Mission Driven Finance, to build the infrastructure for a new financial system that works for and includes all stakeholders. They have a  fellowship program to diversify talent and get capital into overlooked and underestimated communities.

2020 Mission Driven Finance Community Finance Fellow Benson Ochira shares his view on community-first and representative financing: “Speaking from experience, I came here as a refugee, and when I got here I really had to start from scratch... So when we look at new Americans and refugees who have no generational wealth or established credit history, equal access alone won’t cut it. We also need lenders to prioritize them and find ways to help fill in those economic gaps.”

One way they are accomplishing this is by partnering with Freedom for Immigrants and launching the Freedom100 Fund which is aimed at releasing individuals from immigration prison by providing an affordable solution for individuals and families affected by the U.S. immigration detention system.

Recently we’ve had several conversations with funds who are not only focused on measuring and tracking their output but also want to capture the metrics around the positive impact they are making and measure lives changed. Imagine the lives changed when a focus is placed to build inclusive communities and cities to support refugees of all kinds with access to capital. Similar to the supply chain, we are all connected and nothing is siloed. By supporting refugees we can build a more inclusive world and a sustainable future for all.